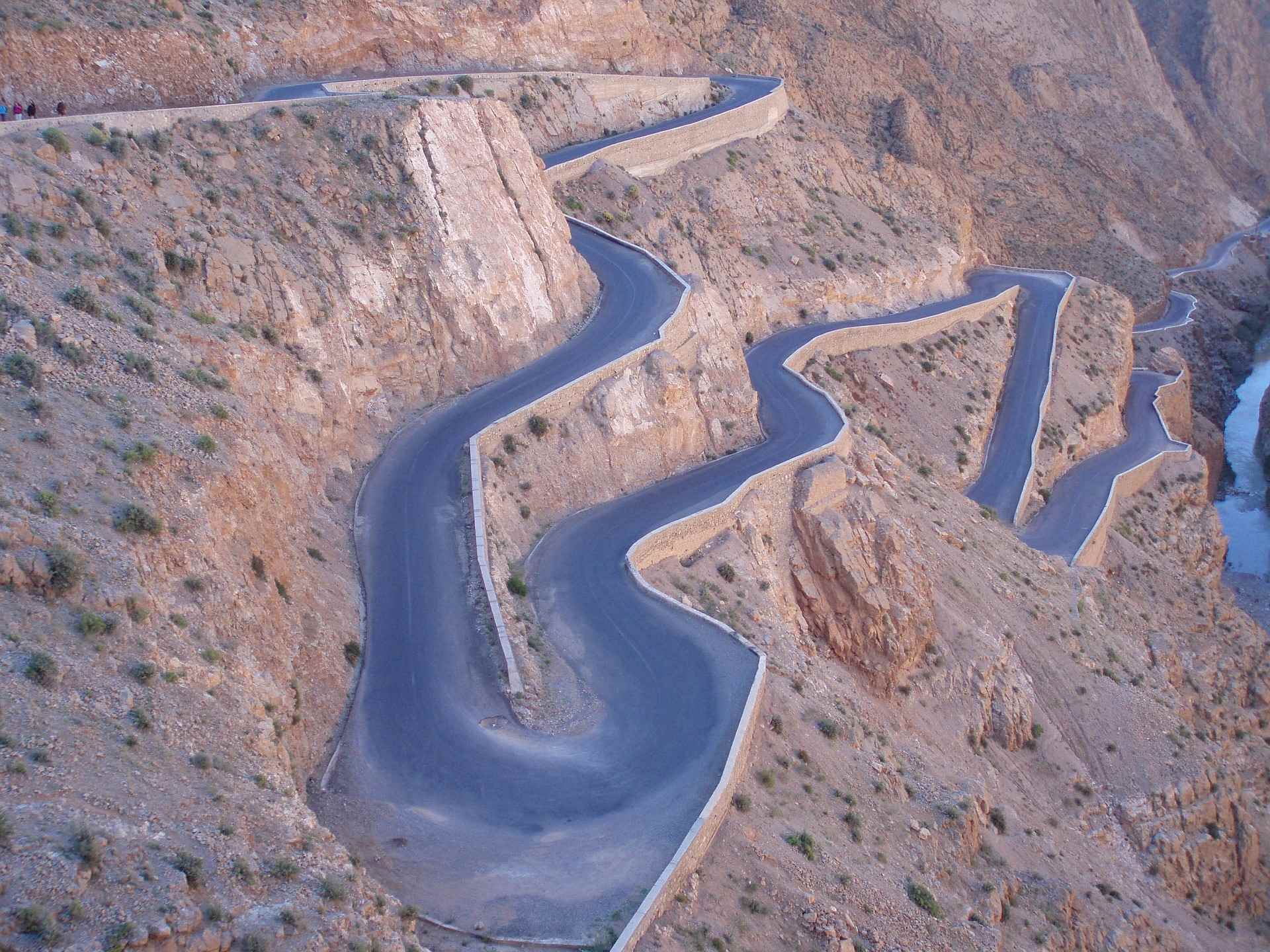 Morocco boasts a fantastic variation in terrain and vegetation, with fertile plains near its Atlantic coast, many dramatic mountains and The Sahara Desert.

Location: Morocco is situated in northwest Africa and is separated from Spain at the northernmost tip by the narrow Straits of Gibraltar. Morocco’s land borders are with Algeria and Mauritania. The Atlantic Ocean lies to the west and the Mediterranean to the north.

There are several fantastic mountain ranges in Morocco on which you can climb, hike, ski or ride mules. The amazing variety of foliage, natural water features and mountain peaks is captivating.

The mountains are often heavily wooded, with firs and cedars on the higher slopes. In winter many of the mountains are covered in snow. Many mountain animals live here, including the unusual Atalas monkey, along with a large variety of migratory birds and birds of prey, such as eagles. There is a large bird reserve located where the Moulouya river flows into the Mediterranean sea.

Amtoudi Peak: Located south of Agadir. You can either climb the 20–30 cm narrow, rocky trail along the edge, or hire a mule to do the job for you. A Spectacular view awaits you at the top.

Atlas Mountains: Filling most of the northwestern corner of Africa, the Atlas are divided into 5 regions stretching from Morocco, through northern Algeria and touching Tunisia.

Morocco has the Middle Atlas, High Atlas and Anti Atlas. The High Atlas is the highest range, with Jabal Toubkal stretching to 4,165 metres. The Middle Atlas reaches 3,350 metres and the Anti Atlas does not reach higher than 2,531 metres, but it still has some very rugged landscape. At the edge of the Anti-Atlas in the extreme south, the scenery is consists of vast, eroded gorges which flow with the rivers into the dry, desolate wastes of the Sahara desert.

Oregano Mountains, Taliouine: Located near Tiznit, south of Agadir. These mountains are covered with oregano and transmit the scent throughout the valley. At the top of these mountains (1,500 meters above sea level) are two caves used by goats for shelter.

Rif Mountains: Located on the northernmost area of Morocco on the north eastern limits of the Atalas mountains. The Rif mountains are made up of steep cliffs, near the coastline of Mediterranean Morocco where the terrain is rugged.

Sarhro Mountains: Located south west of Marrakesh. They are a wonderful winter trekking destination as the desert cools and the High Atlas Mountains become covered with snow. It is a remote area adorned with volcanic monoliths, vegetated plateaux, canyons, tiny Berber villages and the nomadic Ait Atta people. The Sarho are arguably the most charming mountains in the whole of Morocco

Setti Fatma: Located at the end of the Ourika Valley in Marrakesh. It has seven beautiful waterfalls, breathtaking views and mountain long trails for hardened hikers.

Tafraoute Mountains: Located south east of Agadir. The rocky, pink mountains here are the main attractions. A Belgian artist, Jean Verame, once painted some of the rocks blue in 1984, although these have now faded.

Tan Tan Mountains: Located down south. Known for its very flat peak and hollowness in some parts of the mountain.

Morocco has the most extensive river system in North Africa. Its rivers generally flow northwest to the Atlantic or southeast towards the Sahara Desert. The main rivers of Morocco are the Sebou which runs into the Atlantic, and the Moulouya running into the Mediterranean.

To the south and east lies the Sahara Desert. The Sahara is the world’s largest desert and in Arabic its name means `wilderness`. The Sahara does not fit the traditional idea of an entirely flat and waterless area. There are streams in the hills and the desert oases support both human and animal life.

These are to be found along the Atlantic coast, stretching to the Atlas Mountains and they are rich for agriculture, producing most of the country’s fruit and vegetables. It is well irrigated by the melt water from mountain snows from the Atlas. Typical plants are orange trees, date palms and cork oak trees.

Morocco’s climate varies widely: The north is Mediterranean and the south is subtropical while the sea and mountains help to maintain a pleasant climate.

Winters are mild and the summers are hot and dry. Average daytime temperatures in winter range from 16 to 23º C and in summer, from 33 to 42º C. Like Spain, Morocco has approximately 330 days of sunshine per year.

Mountain peaks are covered with snow for most of the year.

Desert temperature variations between night and day are extreme and rainfall is low and unpredictable.

Morocco’s natural environment is under pressure in a number of ways: The increasing number of tourists and the over exploitation of resources such as oil and phosphates could damage the ecosystem in the desert. Overgrazing and the spread of the desert may also threaten currently productive areas in the future.